Join artist and Olympia Printmaker Mimi Williams on Friday, September 21 from 6 pm to 7:30 pm, for a festive and musical opening reception at The Washington Center – there is no cost to attend. The featured artist will have a solo show of over 40 linoleum cut block prints and will be joined by musicians Angie Ward and Mark Medalen of Austin Radio, who have agreed to perform free of charge in support of the arts. 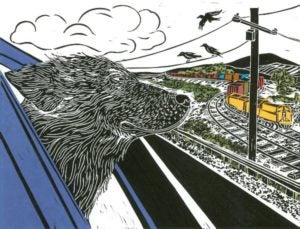 Mimi Williams exhibit titled, “Impressions of the Left Coast” references her life spent living on the west/left coast defined by Highway 101. The hand printed linoleum cut block prints are printed using the back of a wooden spoon. Mimi’s work is graphic and mostly narrative, with visual clues that tell a story. She has been making prints for over 15 years and has her work in permanent collections of the cities of Olympia and Tacoma, Group Health/Kaiser, and the Mayo Clinic. You can also see her work at a few public art installations in Olympia.

Austin Radio are an acoustic duo featuring Olympia natives Angie Ward and Mark Medalen. Angie and Mark are both veterans of the Northwest Music scene and have been performing in various bands and as solo artists for many years. They formed Austin Radio in 2005 and their popular, up-tempo acoustic sound features popular rock and country music, blending tight harmony vocals and driving acoustic guitar.

Posted in: Gallery , Press Release
Back to News