If you’re over the age of 70 ½, making qualified charitable distributions directly from your individual retirement account (IRA) may be a way you can support the Washington Center and lower the income you declare on your taxes. We sat down with David & Kris Bartruff, longtime Washington Center supporters and experienced donors, to share their experience of giving directly from their IRA. 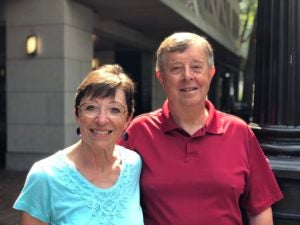 Kris shares, “We both grew up in music, and we’ve been supporters of the arts forever.” David’s father was a church organist, and David played organ himself. In fact, David and Kris met in Bellingham when Kris was singing in a choir that David’s parents were conducting.

“After moving to Olympia in 1993,” says Kris, “We became Washington Center season ticket holders.” Kris and David took their children to performances regularly, and Kris began volunteering with Olympia Junior Programs (OJP) in 1994. She joined the OJP board in 1998 and is currently serving as the first vice president and past president. “We like seeing the different ways performers use their creativity,” says Kris.

“With changes to tax law that take effect this year, a lot of people are going to find out they won’t be itemizing deductions any longer,” says David. But if you’re 70 ½ or older, a qualified charitable distribution from your IRA reduces your taxable income. In years past, this was part of the tax code that was decided by Congress in the waning days of the year. This is now a permanent part of the tax code, which allows donors to prepare in advance. “Donating directly out of your IRA is a way of excluding the withdrawal from income,” says David, “so you’re not going to be paying taxes on that.”

David’s advice? “It’s a learning process.” Have patience your first time. Call and ask your broker or investment company for the paperwork or requirements. It’ll be easier the next time!

Posted in: Development , Press Release
Back to News