A Slice of the Good Life: The 6th Annual Pizza Klatch Gayla 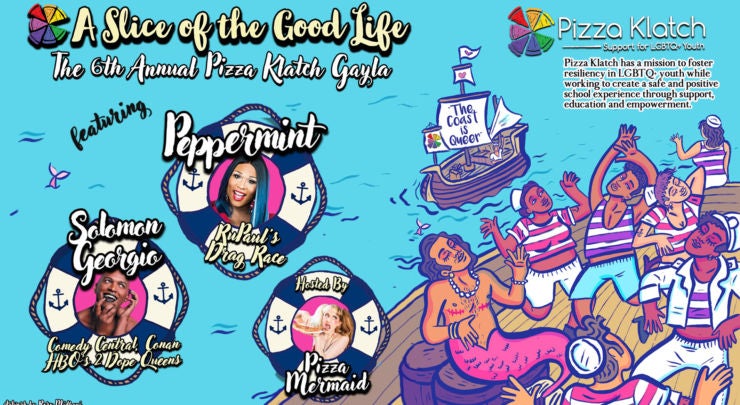 Please join us for A Slice of the Good Life, our joyous 6th Annual Gayla, a community SHELL-ebration and fundraiser organized by and benefiting Pizza Klatch! What is Pizza Klatch? Pizza Klatch is an Olympia-based non-profit organization that runs support groups for LGBTQ+ youth and their allies in 14 Thurston County based high schools and 1 middle school. This year’s Gayla is themed “The Coast is Queer” and will be hosted by bi-coastal burlesque performer, PIZZA MERMAID! Also featuring performances by hilarious stand-up comedian SOLOMON GEORGIO and RuPaul’s Drag Race Season 9 runner up, actress and Broadway star, PEPPERMINT!

PLUS performances and stories from Pizza Klatch youth! A silent auction and prize raffle with locally resourced treasures! Our annual Raise the Paddle fundraiser! An enchanting  “Under the Sea” themed photo booth! And of course, pizza! You can be SHORE it will be a good time for a great cause, so we hope to SEA you there!

Doors are at 6 PM, the main stage show begins at 7:30 PM. Our very popular VIP Reception catered by Dillinger’s will also feature a special meet and greet with the performers as well as feature an exclusive private performance from Seattle-based singer/songwriter, Champagne Honeybee! The VIP Reception begins at 6 PM. Get your tickets now!