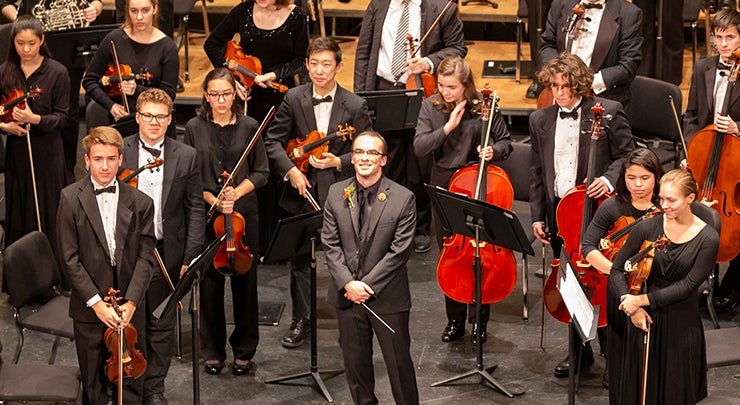 Student Orchestras of Greater Olympia’s Spring Concert has been canceled. Tickets for this event will be refunded.

Welcome to the 20th season Birthday Bash of Student Orchestras of Greater Olympia (SOGO). We have a lot in store for you as Maestro Cameron May presents inspirational programming all season long.

SOGO’s 20th season Birthday Bash Spring program concludes with the Conservatory Orchestra presenting an all-20th-century American program that highlights some important milestones. One day before the 40th anniversary of the eruption of Mount Saint Helens, the orchestra will perform the third movement of Alan Hovhaness’ Symphony No. 50, which depicts the events of May 18, 1980. Also on this program, Aaron Copland’s Quiet City features two of SOGO’s talented graduating seniors, Jaymes Klein and Moira Rader Rice, and the orchestra looks ahead to the 2020 Olympics with John Williams’ The Olympic Spirit.

The May concert will also feature a mass performance of Beethoven’s Ode to Joy, celebrating 20 years of SOGO and coinciding with Beethoven 250 festivities around the world in 2020.

Join us as we celebrate 20 amazing years of SOGO with lots of birthday cake and inspirational performances by over 125 young musicians.

Student, Senior, Child, and Group discounts available
Price above does not include service fee