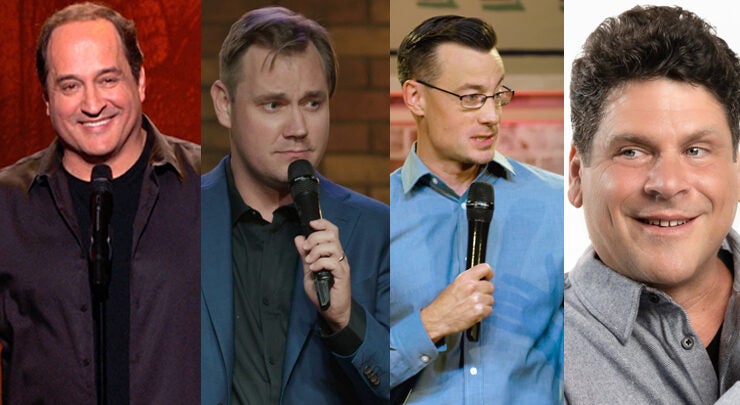 SIX AMAZING ACTS – ONE NIGHT OF AWESOME STAND UP COMEDY.

Featuring: ROCKY LAPORTE   Rocky LaPorte’s appeal comes from his everyman, streetwise style of comedy. Delivering laughs in his trademark Brooklyn accent, he has become one of the most sought-after comedians in the country, and he just recently appeared on on the season 8 of NBC’s Last Comic Standing! Rocky received 5th place out of 10 contestants. A former Chicago truck driver and dock worker, Rocky has accumulated a slew of performances throughout his career, including being a featured comic on Showtime‘s The Godfathers of Comedy, a special starring five of America’s most hilarious Italian American comics.

Rocky traveled with Drew Carey to Iraq to entertain the troops. Rocky has filmed his own Comedy Central Presents special, voted the network’s second most popular comedian in a nationwide poll. Performed on The Tonight Show, A&E‘s Evening At The Improv, VH1‘s Stand-Up Spotlight, sitcom appearances on Cheers and his own NBC pilot called the Rocky LaPorte Show.

His clean, blue-collar style of comedy continues to increase in popularity as he travels the country.

Loved by millions as Skippy from the hugely popular 80’s sitcom Family Ties starring Michael J Fox.  As a stand up comedian Marc has opened for Jay Leno and Jerry Seinfeld.

Find out why the Los Angeles Times calls him “refreshingly bright” and the Boston Globe says he’s “wickedly funny.”

Andrew performed on Last Comic Standing, recorded a comedy special for Dry Bar and made his late-night stand-up debut on Conan. He’s also written and performed sketch comedy for Comedy Central and wrote and blogged for the Sports Show with Norm Macdonald on Comedy Central. Most recently Andrew appeared on the Late Late Show with James Corden.

Tyler Boeh is professionally funny. Comfortable, confident, and hilarious, he uses his quick wit and celebrated talent of “beatboxing” to bring audiences into a hysterical frenzy.

Local to Olympia this up-and-coming comic is on her way to the top with nonstop laughs.

Plus: A Surprise Guest Everyone Will Love

Prices above do not include $5 per ticket service fee