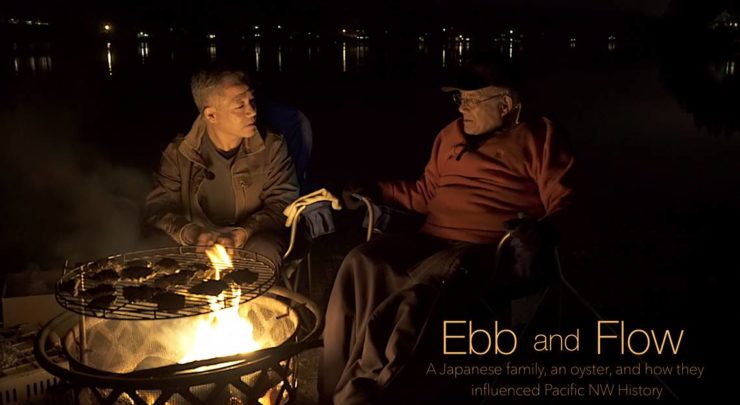 Ebb and Flow – A Japanese/American family, an oyster and how they influenced Pacific NW history.

This film follows 93yr old Jerry (Eiichi) Yamashita’s recounting of the family history to his son Patrick, around a campfire on the beach next to their tidelands.  Relying on Jerry’s excellent memory and rare archival footage, we are taken on a journey spanning three generations, beginning with Jerry’s father Masahide’s immigration from Tokyo to Seattle in 1900.  Arriving with nothing but the clothes on his back and an irrepressible entrepreneurial spirit, his many years of seemingly unending struggle to establish himself and provide for a growing family are revealed. Eventually, his talent for problem solving would play a pivotal role in saving a shellfish farming industry on the verge of collapse and he would go on to become a founding father of one of the Pacific Northwest’s most important institutions.

Just when things were beginning to look up for the Yamashita family, WWII intervened.  All the years of hard work and sacrifice didn’t prevent them from being split up and shipped off to internment camps in California and Montana.  When the war ended, the family returned to begin rebuilding their lives again from scratch.  Carrying on in his father’s footsteps, Jerry is today considered an icon by his peers, beloved by all who know him for his generosity, and his always cheerful and positive outlook that belies all the injustice his family have experienced throughout their lives.

This Japanese/American family’s story is an inspiring one, and at the same time, a cautionary tale of how a society can turn against its immigrants in challenging times.  Indeed, had the young Masahide not come to America looking for new opportunities, the thriving Pacific Northwest shellfish industry might look very different today.

Ebb and Flow – A Japanese-American family, an oyster. and how they influenced Pacific Northwest History. Trailer from S Solomon Leaping Frog Films on Vimeo. Ebb and Flow is produced by Leaping Frog Films.