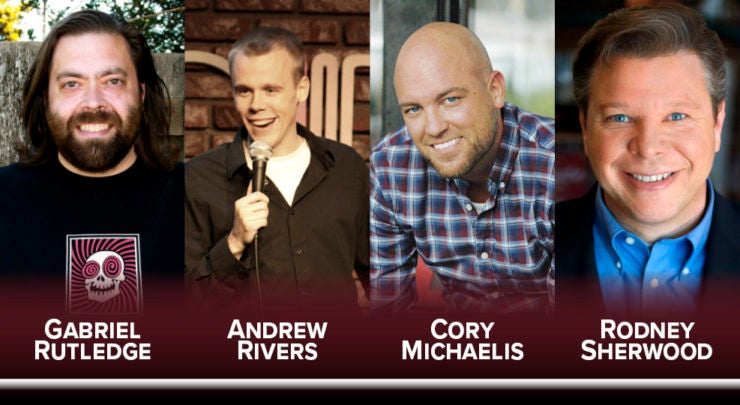 Olympia native Gabriel Rutledge returns to The Washington Center after a year of touring nationally. A past winner of the prestigious Seattle International Comedy Competition, Gabriel has made television appearances on Comedy Central’s Live at Gotham, Nickelodeon’s Nickmom Night Out, and the nationally syndicated Comedy.TV and Comics Unleashed.

Cory Michaelis
Cory is a regular in all of the clubs in the Pacific Northwest, Brad Garrett’s Comedy Club at the MGM Grand Casino in Las Vegas, and headlines comedy clubs, casinos, colleges, and weird bars all over the country.

Andrew Rivers
Andrews very personal and fun storytelling comedy, combined with his exemplary work ethic has earned him high praise from some of the best in the business. Andrew is a featured writer, actor and comedian on the TV show “UpLate NW” also featured on NBC, FOX. Andrew has performed in over 35 states and his podcast called “Don’t Quit Your Night Job” was recently featured in the Seattle Times.