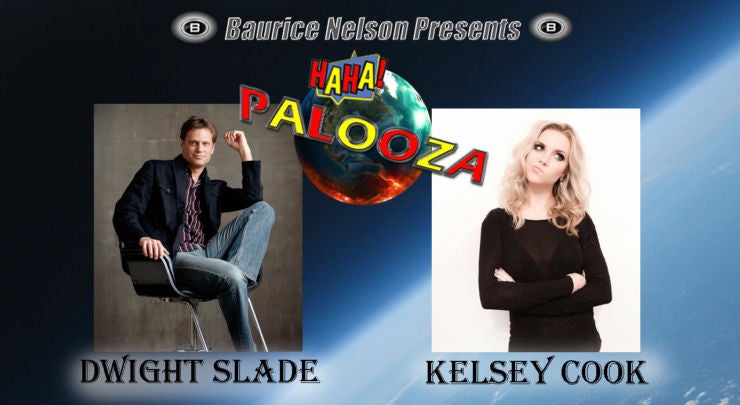 Kick off of an annual comedy showcase event featuring an amazing line up of up and coming to seasoned comedians!

Comedian Dwight Slade has the privilege of being a comedy legend in American stand-up. Winner of the Boston Comedy Festival & Seattle International Comedy Competition, Slade combines an intelligent, raging voice of justice with a juvenile sense of unpredictability that makes every show unique and tailor-made for his audience.

Slade began his comedy career at the tender age of 13 in Houston, Texas. He and his friend Bill Hicks were enamored by the comedians on The Tonight show and began writing jokes to try out on friends. Soon they were defying their parent’s curfew and riding their bikes to open mics.

Since then, Slade has achieved success in nearly every form of entertainment. He did talk radio for 3 years, appeared in the feature films, Inconceivable and Rid Of Me, and has appeared on Comedy Central, The Tonight Show and HBO’s “Best Of The US Comedy Arts Festival.”

Internationally he has appeared at Festivals in Glasgow, Scotland, the famous Edinburgh Fringe Festival and 3 appearances at Montreal’s Just For Laughs Festival. Slade has traveled to Afghanistan to entertain US and Coalition troops and toured Israel and Pakistan.

Slade is married and has two children.

Kelsey Cook is the daughter of an International Yo-Yo Champion and a Professional Foosball player, which made for a humor-filled life at a young age.

Kelsey recently made her late night debut on The Tonight Show with Jimmy Fallon, as well as her Comedy Central debut on This is Not Happening. Her other television appearances include AXS TV Presents Gotham Comedy Live, Punchline on FOX, Laughs on FOX, Uproarious on FUSE and Greatest Party Story Ever on MTV.

She has spent the last three years touring in over 60 cities across the country. Kelsey splits her time between Los Angeles and New York where she is a paid regular at The Comedy Cellar, The Stand, Gotham Comedy Club, New York Comedy Club, and The Laugh Factory. She is also a regular guest on the Jim and Sam Show on SiriusXM.

Mike began his comedy career back in 1982 when you had to be funny to get a gig. He has traveled the US, Canada, and even the Middle East to entertain. People leave his show feeling good about themselves because he has made them laugh at the absurdities of life. He has not missed a gig in 36 years except for that bout of cancer he dealt with. He is not famous but he should be. He is one of the funniest people to come out of the Northwest, so if you get a chance, go see him while you can still afford him. In 2011 after finding himself bald and people telling him he looked like Don Rickles, Mike began studying the master. Combining Mike’s own rapid-fire delivery and Don’s acerbic wit, The Don Rickles Tribute show was born!

Plus Special Guests Appearances and Surprises.

Price above does not include the standard $3 Washington Center facility fee.