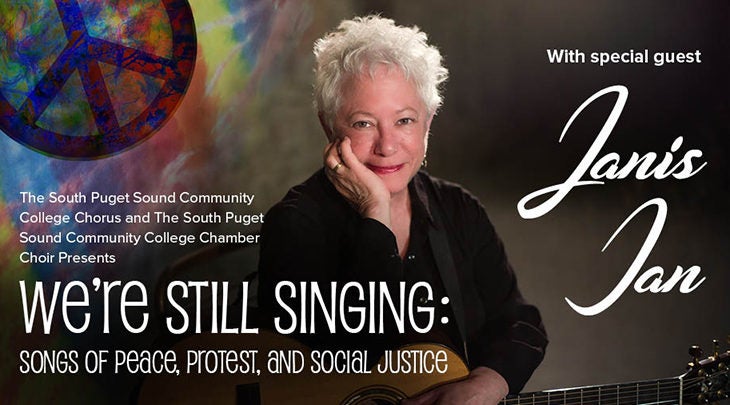 SPSCC is proud to present a unique vocal concert experience featuring the SPSCC College Chorus and SPSCC Chamber Choir with special guest Janis Ian, Grammy-winning singer-songwriter. “We’re Still Singing: Songs of Peace, Protest, and Social Justice” will open with the SPSCC College Chorus and SPSCC Chamber Choir performing a varied array of powerful songs by Janis Ian, Bob Dylan, Lady Gaga, Michael Jackson, and more. The second half will feature a solo set by Janis Ian and will conclude as the combined choirs accompany Ian for a shared performance.

Who is Janis Ian? Ian began making significant marks on the music world at the age of 14 when she recorded the self-penned “Society’s Child”, a hallmark of the civil rights movement. Since then, Ian has earned ten Grammy nominations and three Grammys in eight different categories, most recently for her work with actress Jean Smart. Her song “At Seventeen” was the anthem of a generation and she has earned gold and platinum records in nine different countries. After five decades of touring and recording, Ian decided to ramp down from a high of 200 concerts in nine countries in one year and concentrate more on her writing and outside projects. She has accepted only four shows this year and one of them will be played at SPSCC in Olympia, Washington.