The Irish Rovers and We Banjo 3 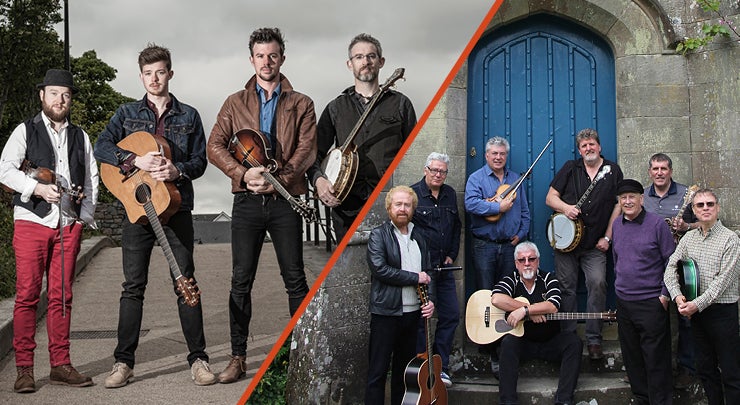 An evening of Celtic and American Roots music is headed your way! The Irish Rovers & We Banjo 3 each perform their own set before coming together in their first ever collaboration. Read on for more information about these unique and unforgettable performers:

The Celtic super-band was founded in Canada in Toronto but first became known on American television in the 60s. As guests on shows like The Tonight Show, The Smothers Brothers Show, Mike Douglas Show, The Virginian, The Dating Game (George Millar actually won the date), they gained experience before hosting their first international television series, The Irish Rovers Show.

Over the next twenty years they became staples of the world music scene with two more international television series, and performing at five World Expos. At that time, fans enjoyed their early hits like “Black Velvet Band,” “The Unicorn,” “Whisky on a Sunday,” and “Wasn’t That A Party.” These days they’ve produced two more television specials, “The Irish Rovers Home in Ireland” and “The Irish Rovers Christmas,” plus gone viral with “Drunken Sailor”!

The days of the long tours are finally coming to an end for these Irish lads as they are now completing one last world tour. After that, they will rove again only for special events, festivals and longer stays. International touring will happen only on a very limited scale. At concerts, fans will enjoy a mix of their hits, rollicking Jigs and Reels, plus hilarious stories from their years on the road.

“They were absolutely the hottest show at this year’s Irish Fest in Milwaukee…the weekend featured the birth of a new force in Irish music” –LiveIreland.com

Brothers Enda & Fergal Scahill and Martin & David Howley are among the most celebrated young musicians in Ireland today. Their competitive success is unrivaled—Martin is a 7-time All-Ireland champion in banjo, Enda a 4-time champion, while Fergal and David hold titles in banjo, fiddle, bodhran and guitar.

This Award-winning quartet from Galway, Ireland delivers a groundbreaking mixture of Irish musical traditions and old-time American and bluegrass influences with remarkable virtuosity and passion.

“Count yourself among the fortunate. You are about to hear something new, something fresh, something daring, something that befits the bright, flamboyant spirit of the Banjo itself.” –Paul F. Wells, Director Emeritus, Mid Tennessee State University