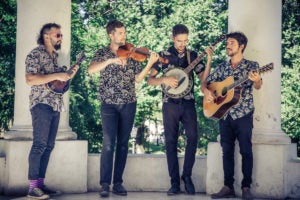 The group will be in Olympia for their record release tour celebrating their new album, Rearrange My Heart produced by banjo and roots-music legend, Bela Fleck. Fleck, who has 36 GRAMMY nominations and has won 14 in a wide variety of categories, met Che Apalache in 2018 and was impressed by their sound and intrigued with their music. He signed on to produce Rearrange My Heart and commented in glide magazine, “I love to work with music that intrigues, excites and inspires me, and that describes Che Apalache to a ‘T’! “

Rolling Stone magazine recently profiled the performers in an article “Americana Artist You Need to Know: Che Apalache.” The article describes the four-man string band who are also good friends with strong vocal harmonies, as “a group that merges cultures to smash through the boundaries often set up around many types of folk music”.  Che Apalache hasTheir music has a message that the lively artists values, that “music can bring people together.” They consider themselves activists through their message as described in this article from NPR titled, Che Apalache Hopes To Open Minds And Ears With Their Latin Bluegreass Fusion.

“It will be exciting to see where this group goes with their new collaboration” explained Washington Center Executive Director Jill Barnes. “This is really an intriguing new genre that embraces the heart of bluegrass harmonies and stringed instrumentations with the rhythms and cultural sounds of several Latin styles of music and beyond. When I first saw them perform live, they brought an energy to the stage and to the room that was palpable. They’re an up and coming group with a lot to give through their music and impactful lyrics.”

For more information about upcoming events please visit www.washingtoncenter.org or call the Box Office at 360-753-8586.