(OLYMPIA, WA, June, 22, 2021) The Washington Center for the Performing Arts is thrilled to announce that Wilco will be performing at 7:30 pm on Saturday, October 9th, 2021. Tickets for the show go on sale to the general public on June 25. Early access to Friends of the Washington Center begins June 23 at noon.

Throughout the past two-plus decades Wilco has won multiple Grammy Awards, released 11 studio albums, as well as a trio of albums with Billy Bragg penning music to lyrics by Woody Guthrie. They have founded their own record label (dBpm Records) and festival (Solid Sound). Wilco | Ode To Joy Tour is sponsored by Ascent Audiology & Hearing and Greene Realty.

Wilco will be performing songs from their most recent album Ode to Joy as well as many of their fans’ favorites spanning their 20-year career. Described by NPR as the best of the best live, Wilco is known as a live powerhouse.  The Ode to Joy album presents a “unique rhythm track and a minimalist instrumentation, with lyrics at once observant, hopeful, morbid, tolerant, and abstract.” 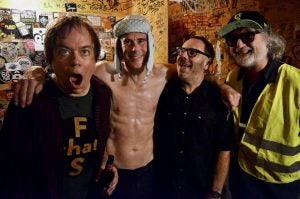 Openers The Young Fresh Fellows released their first album The Fabulous Sounds Of The Pacific Northwest in 1984.  There have been many more, including last year’s stillborn Toxic Youth on Yep Roc Records.  The underachieving but stalwart quartet remains Kurt Bloch, Tad Hutchison, Jim Sangster, and Scott McCaughey, and is still generally recognized as the most famous band from Seattle.

Tickets start at $64. Executive Director, Jill Barnes, shares that with under 1,000 seats at the Washington Center, this will be one of the most intimate venues Wilco has performed at in recent times. Don’t delay, this concert is sure to sell out quickly. For tickets, visit https://www.washingtoncenter.org/event/wilco/

If you would like more information, please contact Jocelyn Wood at 360.753.8585 ext 103 or email her at jwood@washingtoncenter.org